Operator MOL Norge has spudded the Oppdal/Driva well located on the east flank of the Mandal High - 3 kilometres southeast of dry well 2/6-3.

Block 2/6 is structurally located on the eastern margin of the Norwegian part of the Feda Graben. The block partly covers the Piggvar Terrace, the metamorphic Mandal High and the northwestern part of the Søgne basin.

The PL860 acreage was originally awarded in 1965 in Norway’s first licensing round as PL 008. ELF Norway AS drilled 4 wells.

In 1994 Saga Petroleum AS took over operatorship and drilled well 2/6-5. It targeted prospects above and immediately overlying the Mandal High. Later in 2000, the PL008 operatorship was transferred to Amerada Hess who relinquished it in 2002.

In 1996, Saga discovered oil in 2/6-5 in the Tor Formation in the primary target, a NW-SE elongate four-way closure flexural fold above the Mandal High metamorphic Basement.

Well 2/6-5 also had a secondary reservoir target below the Shetland Group and above the Basement but the well did not encounter a Mesozoic siliciclastic wedge.

Saga did however discover oil in fractures in the Basement.

Saga had proved the Mandal High had acted over geological time as an oil migration system. 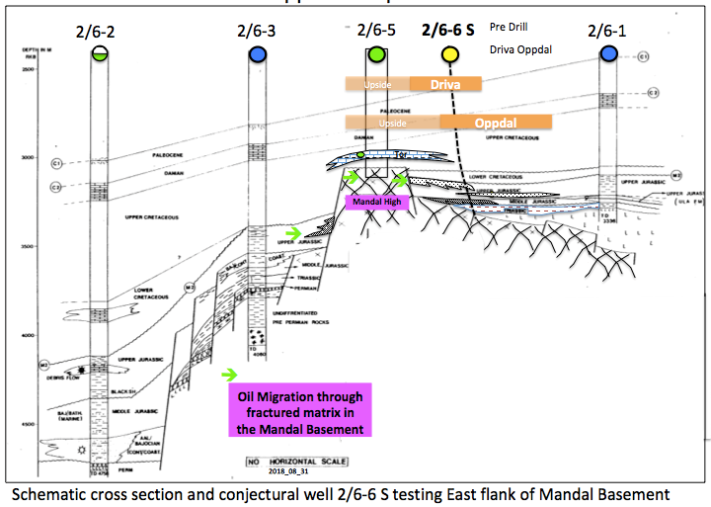 MOL and Lundin are sharing exploration concepts and learnings from the Lundin exploration successes of Johan Sverdrup, Luno I and Luno II of the Utsira High to the smaller Mandal High.

Today’s high-resolution broadband seismic data has permitted more accurate mapping of the dip slope prospectivity of the Mandal High.  MOL has mapped out a series of exploration prospects on the eastward dipping slope of the Mandal High and these include Driva and Oppdal.

At the NCS Exploration Strategy Conference in Stavanger, Henrik Jakobsen from MOL Norge shared with the audience that the target in the Oppdal prospect are Paleocene sandstones which can be charged by oil migrating from 2/6-5 through the chalk. The target at Driva is a turbidite system on the eastern side of the Mandal High with a secondary target in the Rotliegendes sandstones. The next firm well in the area in PL539 (Vinstra-Otta) has both Rotliegend and Middle Jurassic targets.

The Utsira High oil migration model and the exploration question now waits answering “Has the oil discovered in 2/6-5 managed to migrate through the Mandal High basement fractures and so back fill prospective Upper Jurassic and older targets to the east of the Mandal High“?

An alternative oil migration route into prospect Driva is through an in-sized valley fill exploration target on Mandal High as is shown on the prospects map.

Lundin obviously thinks the Utsira High oil migration model is applicable to Mandal, as Lundin has assigned a geological COS 30% to Driva. MOL Norge believes there is potentially a world class discovery in the making with more than 500 MMbbl resource potential. The company estimates Net Unrisked Resources of 150 MMboe at Oppdal Driva and Net Risked Resources of 45 Mmboe.

APA rounds are all about ‘yet to find’ resources and transferring exploration knowledge into delivering new applications to the MPE and the NPD. MOL and Lundin have a clear joint aim to make a material discovery at Driva – Oppdal. With this year’s higher sustained oil price, wildcat Exploration is returning to the NCS.