1.5 bnboe of commercial resources were discovered (of which 900 mmboe has been sanctioned for development), at an average of 150 mmboe per year and a drilling finding cost of US$5.1/boe.

The UKCS replaced 22% of production through new field discoveries over the decade. Commercial success rates averaged 27% and 50% of the discovered volume was by just eight companies. 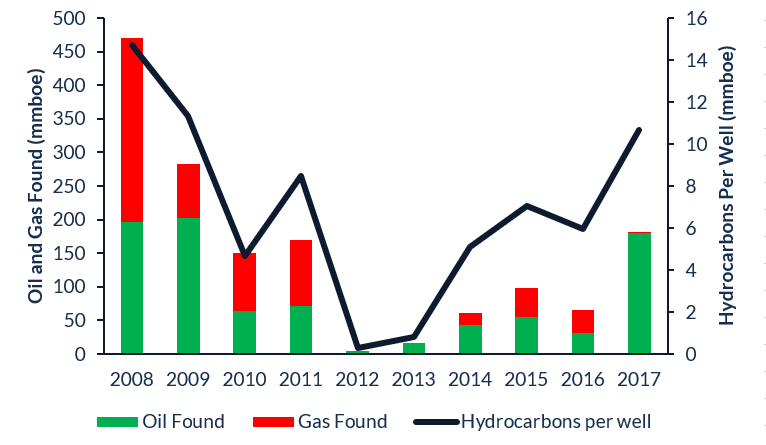 Activity stabilised at an average of 15 exploration wells per year after the 2014 oil price crash and commercial success rates have recovered to a high of 45% in 2016, which Westwood attributes to selective drilling of improved prospect inventories.

In addition, volumes discovered reached a high of 180 mmboe in 2017.

Maersk was the most active explorer, having drilled 20 exploration wells, and found the most net resources at 215 mmboe due to its 66% share of the 250 mmboe Culzean discovery, the largest find over the period, which was drilled in 2008. In addition to Maersk, only BP and Dana Petroleum found more than 100 mmboe net resources. Five of the most active explorers achieved finding costs of <$2.0/boe.

Exploration drilling is down in 2018, with only three wells completed in the first nine months of 2018 of which two are commercial discoveries. Total’s 1 tcf Glendronach discovery was announced on 24 September 2018. The well lies in the emerging syn-rift Cretaceous turbidite play West of Shetlands and is the second largest discovery over the past decade after Culzean.

Over the next 18 months, Westwood has identified 17 exploration wells likely to be drilled, testing around over 2 bnboe unrisked resources. Over 1 bnboe of these prospective resources lies in the emerging West of Shetlands plays and a further 600+ mmboe is in the Central North Sea.

Westwood analysis shows an industry bias to overestimating prospective discovery sizes, which on average were only 50% of pre-drill estimates since 2014.

The challenge for the UK is maintaining the rigour that delivered the improved success rates and lower finding costs since 2014. Glendronach highlights that high impact discoveries are still possible, and it is encouraging that new plays are still emerging over 50 years into the history of UKCS exploration.

The programme includes the following sessions: