As announced this week, the Nini West field in the Siri Canyon has reached a milestone into being developed as a site for CO2 injection and storage by operator Ineos and partner Wintershall Dea. A study performed by DNV GL suggests that the reservoir is conceptually suitable for injecting 0.45 million tonnes CO2 per year per well for a 10-year period, and that the subsea reservoir can safely contain the CO2 in compressed form.

The Siri Canyon sands were deposited during the Paleocene and Eocene as deep marine glauconite-rich mass flows, interbedded with hemipelagic marls and mudstones. Formation of the canyon itself took place a little earlier in Danian times, when uplift of the Scandinavian landmass caused submarine sliding of the uppermost section of the Chalk.

The Nini fields are the easternmost ones of the string of fields in the Siri Play and consist of Nini Central, East and West. Nini was discovered in 2000 and production started from an unmanned satellite platform to the Siri Field in August 2003. In 2004, the Danish Energy Agency reported a recoverable volume of between 6.3 and 19 MMbls of oil, and although it is not entirely clear whether this is for all three accumulations or not, it does indicate the modest size of the trap. 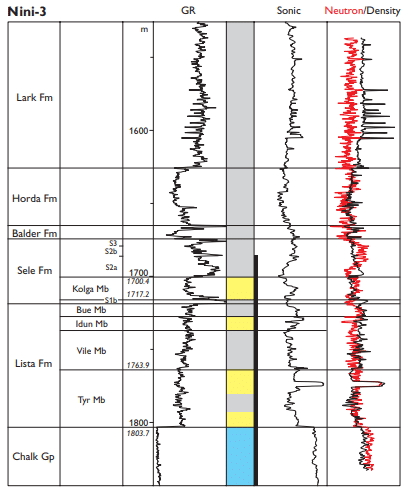 In addition to CO2 injection in a depleted oil field, Ineos also looks at further exploration in the Siri Canyon area as presented by Nigel Marsh during the NCS Exploration Strategy Conference last week. The company is looking at the area to the northeast of the Canyon in Norwegian waters, where migration and timing are considered the main play risks.

Ithaca and BP start up Vorlich

Discovered in 2014 by GdF Suez and BP through drilling 30/1f-13Z in the UK Central North Sea, BP this week announced the field has taken into production. Now operated by Ithaca, the reservoir was flow tested at a maximum rate of 5,350 barrels of oil at the time. The field is estimated to contain oil reserves of 34Mboe, as of March 2018.

The field has been developed through two wells with peak production expected to reach 20,000 barrels oil equivalent gross per day. Vorlich hydrocarbons are processed through Ithaca’s FPF-1 floating production facility at the Stella field five km to the south.

Similar to the Siri Canyon reservoirs, oil in Vorlich is also produced from Paleocene sandstones. The composite well log of the 30/1f-13Z well (see above) mentions the Rogaland Sandstone Member, but comparing the location of the field to the excellent publication of James Eldrett on Sele Formation sandstone distribution in the Central North Sea, it looks likely that the sands can be classified as distal T75 Forties sandstones of Thanetian age.

The static Petrel model of the giant Groningen field in the Netherlands is available for public download. Consisting of more than 300 wells including well logs, seismic data as well as porosity and permeability cubes, the model should be a great resource for anyone wanting to further upskill in static modelling or learn more about the Rotliegend reservoir of this major field that will soon cease production because of induced seismicity and subsidence concerns. Next week we will report more elaborately on this dataset being available.

Have a good weekend,