The gate to the Faroese shelf is now open. Photo: Terje Solbakk

According to a expronews source, the 5th licensing round of the Faroese Continental Shelf did not receive any applications from the O&G exploration companies. Now Jardfeingi has opened for out-of-round bids.

The Geological Survey of the Faroe Islands, Jardfeingi, quietly opened up for Out-of-round bids, after a lack of interest from the oil and gas exploration companies following the 5th licensing round announcement. 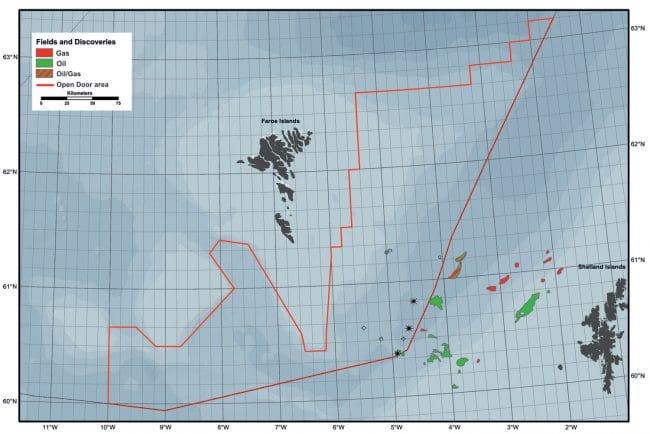 The area that is now open is situated next to the UK Continental Shelf (UKCS). Map: Jardfeingi.

According to Jardfeingi, there are some large structures, of which the Fugloy Ridge, Ymir Ridge, and the Wyville Thomson Ridge, are currently the most promising. In addition, there is interesting potential at the edge of the volcanics at e.g. the Mid Faroe High and in the Judd Basin.

Two sub-areas are addressed, to the east and south of the Faroes with reservoirs in fractured volcanics and siliciclastic sandstones. The seal in the eastern area is the Lamba shale/volcanics. In the southern area, they expect sealing intravolcanic tuffs and marine shales.

The UKCS exploration has revealed several commercial discoveries, however, the Faroese exploration history has until now been disappointing, although geophysical investigations have led to nine more or less disappointing wild cats offshore. In addition, relevant data is available from three stratigraphic wells onshore.

The nine wildcats of the Faroese shelf. Map: Jardfeingi.

The 6004/16-1 Marjun well found significant quantities of light oil and gas in the Lower Paleocene sandstone reservoir, according to GeoExpro, but with a disappointing follow-up well. Two earlier wells also proved a working petroleum system, the wells 6005/15-1 Longan with shows and 6004/12-1 Svinoy with some non-commercial gas.

Later sub-basalt wells did find good indications of a working petroleum system also in this play, but again nothing of commercial interest. The last two wells on the Faroese Shelf were the dry 6104/21-2 T2 Brugdan II well from 2014 and finally, 6104/25-1 Súla/Stelkur which proved non-commercial traces of hydrocarbons.

Will the O&G exploration companies dive into the Faroese shelf again?