Anomalies like this may prove essential to find the remaining resources on the NCS.

25 billion barrels to be found

More exploration is needed if NCS production and level of activity are to be maintained at current levels, according to NPD.

The expected value of remaining recoverable resources on the Norwegian continental shelf is 52 billion barrels oe, according to the Resource Report 2019.

Despite more than 50 years of exploration, the NPD’s assessment is that big opportunities still exist on the NCS.

Roughly 53 per cent of the expected remaining resources lie in fields and discoveries, while 47 per cent remain – 25 billion barrels – to be found, according to Resource Report 2018.

From around 2025, a steadily larger proportion of production must come from as yet undiscovered resources. If production and the level of activity are to be maintained at current levels, more exploration is needed and new resources must be proven, NPD says.

This is what the forthcoming NCS Exploration Strategy 2019 is all about (November 20-21).

22 oil companies will present plans and strategies for how to make the necessary discoveries for Norway to remain a significant producer of oil and gas. 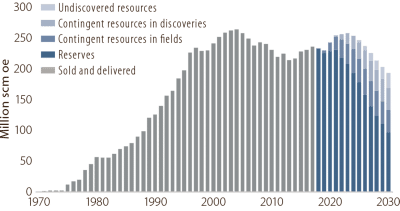 Historical and expected future production from the NCS to 2030. Source: NPD